Hooking up my friends…

Or How to propagate Ivy. 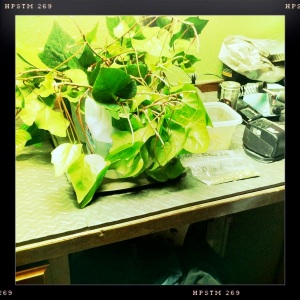 This project was one I started for Hank and Tony at the Poplar Center for Cultural Excellence.  They want to spruce that bitchin’ bachelor pad up… and green things are always a good way to go. 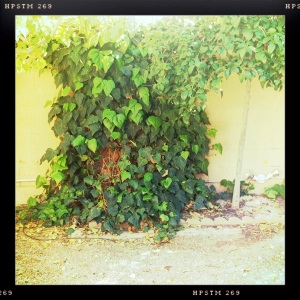 Step 1.  Choose a healthy plant.  Survival of the fittest people… we only want to clone the plants that are the strongest, prettiest and most likely to succeed. (not to get all Hitler on you…)  and Cut sections that are 6-8 inches long.

Step 2. Some people swear by commercial rooting hormone powders.  I’ve tried them before, back in my teens when I spent a lot of time in a Hydroponic shop on Western & Oakey. No longer my thing.  If its yours, dip the tip of your cutting as quickly as possible.  These days I throw caution to the wind and do it Old School – snip off any of the leaves in the area you’re going to submerge (or they will get squishy and rot) then put them in water right away.

Step 3. How much water?  Well currently I’m using a couple gallon Milk jugs cut in half, filled up about 5 or 6 inches with water.

Step 4. Wait and wait and then add more water.  Oh, and they like a sunny spot.  Indirect sunlight if you can.  This time I’ve placed mine in the garage under My Sweet Husbands florescent light and they LOVE it!

Step 5. Eventually you’ll see some little white nubs growing on the sides of the submerged stems.  This should take 2 or 3 weeks.  You’ll want to let these get 3 or 4 inches long before you move on…

Step 6. Depending on whether you’ll be keeping them indoors or out, choose your location or pot.  Fill your container or amend the soil with 1 part soil, 1 part moss, one part sand and PLANT!!

Step 7. To help your new plant grow nice and full, pinch off the ends of each new vine.  Also, spray often with a fine mist if indoors… they’ll thank you for it!

Other Interesting Ivy facts (A.K.A.  if you’re planting outside… you’ve been warned):

– in the NASA clean air study, they showed that Ivy removed formaldehyde, benzene, and carbon monoxide from the air.

– “First year it sleeps, seconds year it creeps, third year it leaps” was a cute quote I found regarding Ivy.

– From the National Park Service: “English ivy is a vigorous growing vine that impacts all levels of disturbed and undisturbed forested areas, growing both as a ground cover and a climbing vine. As the ivy climbs in search of increased light, it engulfs and kills branches by blocking light from reaching the host tree’s leaves. Branch dieback proceeds from the lower to upper branches, often leaving the tree with just a small green “broccoli head.” The host tree eventually succumbs entirely from this insidious and steady weakening. In addition, the added weight of the vines makes infested trees much more susceptible to blow-over during high rain and wind events and heavy snowfalls. Trees heavily draped with ivy can be hazardous if near roads, walkways, homes and other peopled areas. On the ground, English ivy forms dense and extensive monocultures that exclude native plants. English ivy also serves as a reservoir for Bacterial Leaf Scorch (Xylella fastidiosa), a plant pathogen that is harmful to elms, oaks, maples and other native plants.”

Next: we’re going to take a journey through my yard… checking in on all of the gardens.