This is Vegas… Right?

I feel like I’m entitled… and don’t worry, I’ve heard the whole “you’ve got an overwhelming sense of entitlement” thing before.  Usually it was from my Dad when I’d ask for something “crazy” like summer camp.  More recently when I ask my husband for something “crazy”… like a cabana in the backyard.

This time though… Jesse decided to endorse my craziness and gave me a green light on the project.  He helped with the grass (as you saw in Part #2) and gave me the money to buy the succulents for the little garden behind the diving board (as you saw in Part #1).  But the gazebo… that was all me!  I made enough money at the Gears show I threw at Boomers a couple weeks ago, combined with some money I had to buy it cash.  Just had to talk the guy with one on craigslist.com down to $175 from $250.

48 hours after negotiations began (I think I mentioned before that its one of my skills) he said I could pick it up.  After an exhausting trip to North Town with Gadzuki, complete with bad GPS directions and a potty training “close call”… The sweet Albertsons brand gazebo was MINE!! 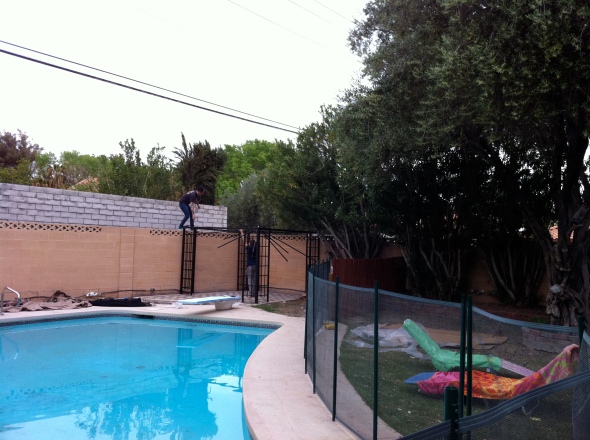 The hard part was waiting for Jesse squared to install it (Jess & Jesse Junior).  But it was well worth the wait.  Oh, did I forget to mention that?  Its been a very long wait…

Almost 5 years ago when we got married, we wanted to honeymoon in Acapulco (and visit the real Copa!)  Kids and money got in the way… and stayed in the way.  We never did take our honeymoon… but a long summer in my own Copa Cabana, with the love of my life, in our dream house makes Acapulco sound as important as summer camp does to me now… 20 years later. 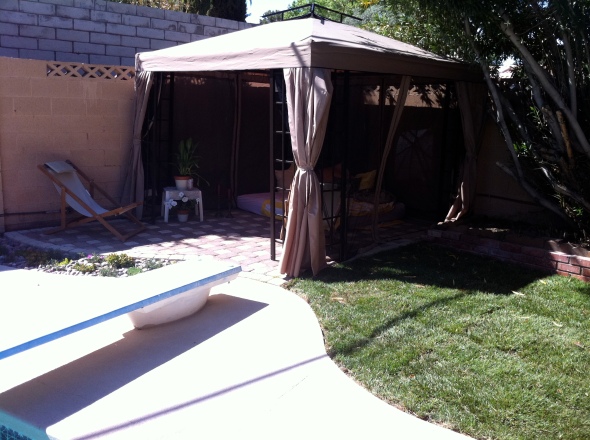 Next we’ll take a walk back through the garden… Update on all things veggie & compost! 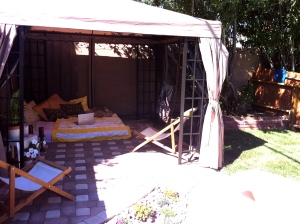 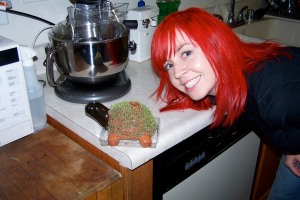 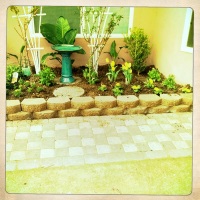